GETTING IT BACK: THE STORY OF CYMANDE
AUSTRALIAN PREMIERE
Presented by Groovescooter for EMC Festival

”Nobody forgets Cymande… Once you’re introduced to it, that relationship is with you for life. ”  – Cut Chemist

“If it wasn’t for songs like these there would have been no hip hop.” – Jazzy Jay

Though packed with their infectious grooves, it’s more than a film about music. Getting It Back: The Story of Cymande is also a story of adaptation, racism, survival, ageing and revitalisation. Alongside the band’s likeable members, providing on screen tributes and explaining why the band are so revered and universally loved are a galaxy of musicians and producers influenced and enthralled by their music. These include Mark Ronson, Norman Jay MBE, Jazzie B, DJ Maseo of De La Soul, Jim James, Nicky Siano, Louie Vega (Masters At Work) and Stones Throw’s Peanut Butter Wolf, who confesses he originally pronounced their name “cymonade” (as in, lemonade).

Some call Cymande “the greatest band you’ve never heard of.” But even if you’re not one of the band’s legion of rare-groove collector fans around the globe, you’ve no doubt heard their signature tunes Dove, Bra and The Message a thousand times via samples in some of your favourite hip hop tunes. Cymande’s message-music is utterly unique, magical and irresistible. Formed in the early 70s, the group of Black Caribbean musicians who first came together in South London, shared a common love of rhythm and a message of peace. Cymande – with the dove as their symbol – combined jazz, funk, soul, Afro-tropical and calypso grooves to form a sound unlike any other; both meditative and danceable. Their fusion of inspirations quite literally changed lives and shaped the development of music worldwide for the next five decades. Endorsed by every subsequent music movement since, and sampled by a who’s-who of hip hop (including The Fugees, Wu Tang Clan, De La Soul and Queen Latifah) Cymande first found success in the USA and so many assumed they were African-American. They were instead the first British group to headline at New York’s famous Apollo Theatre, while everyone from Al Green and Ramsey Lewis to Mandrill invited them to tour the States in the first few years of the seventies, also scoring them a coveted performance spot on TV’s Soul Train program. Back in Britain during those racially turbulent times however, they were largely met with indifference. Becoming disillusioned, they disbanded. But the music lives on, and as new generations of artists like Soul II Soul and Mark Ronson imbibed or reworked the band’s pioneering sounds in fresh ways, the dove continued spreading Cymande’s message and bewitching music far and wide, prompting the band’s return to playing and recording after forty years. For the first time on film, this is their story. 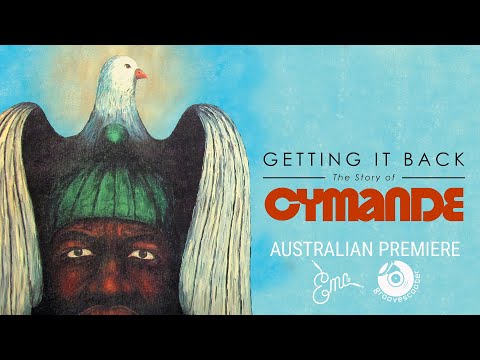 Cymande Documentary Trailer - Getting It Back The Story of Cymande Australia