ArtGroupie – the exhibition and CD collected and displayed works from musicians/DJs/producers who also work in various visual art forms. Housed at Kings Cross nightclub/gallery Melt in July 2006, the exhibition showcased paintings, drawings and photos (see examples below) from sound sculptors like Martin Kennedy (All India Radio), Don Meers, David Kagan (The Dub Dentist), Tony Dupe (Saddleback), Justin Cooper, Rick Bull (Deepchild), Philip Ricketson (The Hoo Haas), Georgie Zuzak (Groovescooter/Mothloop) and members of Telafonica. All 11 exhibiting artists’ works were for sale and were also represented with tracks on this CD, available on opening night or by mail order from us.

ArtGroupie has grown into a recurring series of exhibitions, with the number of exhibiting artists growing to include over 40, launches and exhibition events now include live performances, DJs and wrap parties with friends like the Soul Of Sydney crew.

PURCHASE the CD from our Bandcamp store. 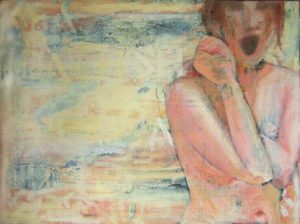 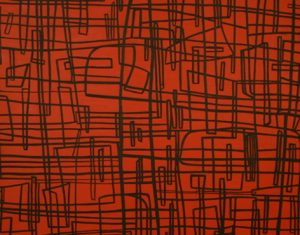 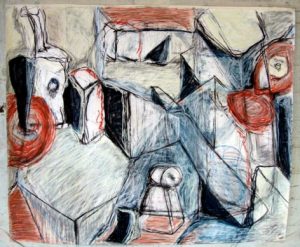 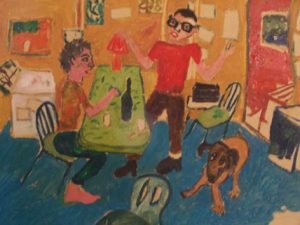 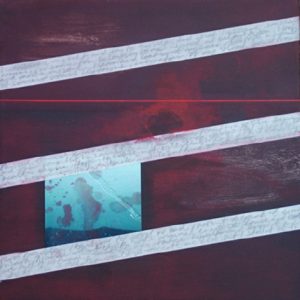 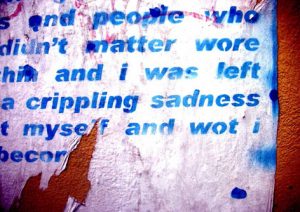 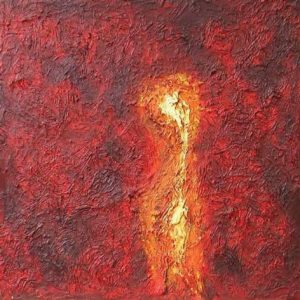 Music meets art, in this fresh exhibition featuring 11 Australian artists who work in both the visual and audio realms. With works incorporating mixed media paintings, photography, drawing and silk-screens, this month long exhibit at Sydney’s gallery-nightclub venue, Melt, draws on the rich tradition of musicians/producers whose vision go beyond sound.

Images, whether those yet to be downloaded from the imagination, or those found in film, books, paintings, architecture and nature, have long provided inspiration for songwriters and sound sculptures. Numerous producers first visualise their pieces before laying fingers to a keyboard, no matter if that keyboard is attached to a piano or a computer. Interestingly, it’s often these images and the ones dictated by lyrics or the listener’s own imagination, which give music a further dimension. In this unique exhibition, visitors will get to experience what comes forth from music makers when they decide to pick up a paint brush or camera rather than turning to their instrument of choice. It represents work from both artists who have been working in the visual arena for many years or those sharing their visions here for the first time. Some of the featured artists have turned to visual art as a new creative deviation having worked as musicians for some time, whilst others were originally painters, photographers or graphic designers who discovered the freedom of music later in life. Without exception, all are unique and inventive in both their chosen fields, regardless of their desire to continue creating as audio-visualists, or giving in to the urge to pursue one over the other.

Melbourne’s Martin Kennedy is best known these days as the man behind evocative downbeat group and ARIA nominees, All India Radio, who have released four albums to date on the Inevitable label and whose filmic music has been used to underscore moving images. Previously, Kennedy was a part of indie band Pray TV but began by studying fine art and working as a painter. He is currently working on collaborations with Steve Kilbey (The Church), Don Meers and David Bridie (Not Drowning Waving/My Friend The Chocolate Cake).

Rick Bull is the soulful socio-dub producer known as Deepchild, whose numerous releases and remixes have become a mainstay of clubs and radio. His distinct chocolate dubs (and those recently shorn, bum-length dreads) are as recognisable as the sharp graphics he has created for both his own albums and other community/commercial works. Working as a DJ, radio announcer, producer and graphic artist, Deepchild is currently signed to the Future Classic label which is releasing his 4th LP this year, while his remixes (for groups as varied Tracky Dax, amphibian, Entropic, Inga Liljestrom and Vassy) have appeared on many labels.

Any Sydney artist, musician, actor or creative type who has ever needed a tooth filled, has probably visited David Kagan‘s famous dental surgery on Oxford St. When he’s not fixing teeth, David is either sitting in bed pulling dub sounds on his laptop, or travelling the world taking photos. Many of his photos are hung around his Paddington dental practice along with the countless paintings and murals which adorn his walls. These work as both promotion for his artist-patients as well as striking distractions from the pneumatic drill which often gets drowned out by the sound of dub pounding from The Dub Dentist‘s speakers. A true Sydney character and great dentist too!

Tony Dupe has been cantering through Australia’s musical landscape for a number of years, most recently as the beautiful Saddleback, but previously as the mainstay of Sydney group Glove Box, who had something of a cult following. If you haven’t met him at one of these groups’ gigs, he’s probably sold you a great album from behind the counter of any number of record bars. His recording studio on the south coast of NSW has attracted bands from both here and overseas. Many of the bands Tony has recorded have ended up on his own Heavy label, and as a producer he’s been responsible for shaping albums by people like Holly Throsby, Via Tania, Nightradio, Jack Ladder, Joseph Leonard and The Woods Themselves. Apart from the deft musical fingers Tony has stuck in various pies, he saves his trigger finger for the camera which he uses to capture moods that take on a painterly effect.

The last of the three photographer’s included in Art Groupie, is cinematic maestro Don Meers, whose photography is exhibited on canvas. Don has created a number of wide-screen, downbeat albums for the Groovescooter label since his debut in 1999 and his music has also featured in film and TV. When he’s not creating music for either record or screen, remixing other artists (Majella O’Shea, Inga Liljestrom), or collaborating (most notably with All India Radio of late), Don also runs his own filming house, DoJo. It’s no surprise then to find such a visual musician, is also a keen photographer and traveller. His music has also featured on both Music For Film compilations for the Sydney Film Festival as well as numerous compilations.

Justin Cooper is a Sydney painter and sculptor who contributes a fantastic large scale drawing to Art Groupie, which was created on Cockatoo Island, the site of Sydney’s famed music festival of 2005. During the last few years, Justin has moved away from producing music (he is probably best known for his beat focussed albums under the CUS1 alias) to focus more on visual art and is currently studying art full-time. We’re lucky then to have a brand new electronic piece from Cus1, exlusive to the Art Groupie CD. Justin is also incorporating his interest in sound and his more recent ambient soundscapes into large scale clay sculptures.

Former Melbourne caffeine addict Philip Ricketson is now a Sydney mainstay and arguably our own answer to Iggy Pop and Lou Reed. The guitar slinging, cow-punk has been known to cause havoc in pubs, on sidewalks and at parties as the antagonist in alt-country group The Hoo Haas. Most of his time however is spent scouring hopper bins and Sydney streets for scraps he can use as canvasses to paint his colourful character/situation driven pieces. They’re hard to lay your hands on though, because they’ve either been snavelled at sold-out shows or are littering the walls of a trail of group houses where Philip can usually be found lolling. Philip has been painting for a number of years and has also spent days modelling for others in cold student classrooms.

Adrian Elmer and David Hughes make up two thirds of the electronic group Telafonica and both are also keen artists who met at school. Adrian works as an art teacher by day and is a multi-instrumentalist musician and label head (4-4-2 Music) by night. Interestingly a number of years ago, his portrait of Andy Rantzen (Itch-e & Scratch-e/Cherry 2000) was entered in the Archibald. David on the other hand is a graphic designer with his own company (Designed by Kind Permission) and besides creating his own artworks, has also designed and illustrated numerous album covers.

Alex Crowfoot is a graphic designer and visual artist who studied film theory in the UK and also runs his own commercial design practice, Triangle Square out of Newtown. As a multi-instrumentalist musician, producer, remixer and singer, he is one half of Sydney group O||O, whose second album is due for release in August.

Georgie Zuzak co-runs Groovescooter Records and the da dAdA labels and has also curated Art Groupie. She began performing in bands in the late ’80s as a singer, and whilst she has continued to collaborate as a singer sporadically since that time as well as working on remixes and tracks as part of production aliases Mothloop and Groovescooter, over the last three years her creative energies as an artist have been focussed on painting. 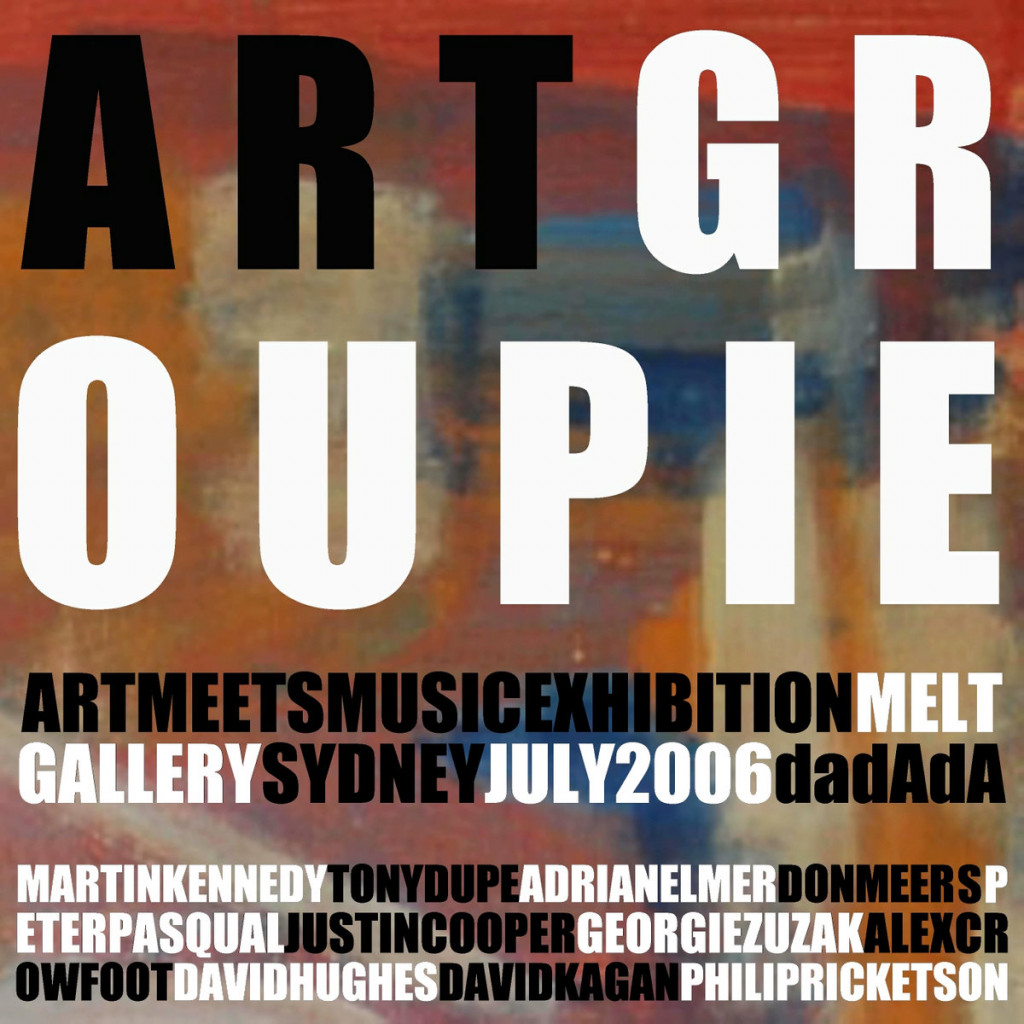