Presented by Groovescooter for
the Electronic Music Conference

Bloodlight And Bami is already garnering great press in Europe but is not released in Australian cinemas until 2018. Following its recent festival premiere, Groovescooter  presents two exclusive previews, providing Sydneysiders with their only opportunity this year to see this personal portrait of one of pop music’s most enduring figures.

There are pop icons, disco icons, gay icons, fashion icons, feminist icons, cultural icons… and then there’s the utterly unique Grace Jones. Forget traditional music documentary formats, for someone as unconventional as Jones, director Sophie Fiennes turns in an artistically rendered, observational chronicle of an artist in her sixties, but still at the top of her game. Visually visceral, musically rich and starring a candid Grace Jones as you’ve never seen her, Bloodlight And Bami takes the viewer on an electrifying journey that moves between four cinematic layers – performance, family, artist and gypsy – to explore the fascinating world of this cultural phenomenon.

Whether in the studio with Sly & Robbie, chatting with old friend and designer Jean-Paul Goude. on stage performing classics like Pull Up to the Bumper and Slave to the Rhythm, or hanging out with her extended family in Jamaica picking over the memories of a childhood haunted by the patriarchal zealot recounted in Williams Blood, throughout this film Grace Jones is larger than life. By turns funny and far-sighted, tender and terrifying, capricious and captivating, beside the panorama of fantastical outfits, we also spend time with Ms Jones as she steps out from behind the fabric and stunning masks: daughter, mother, sister and grandmother. 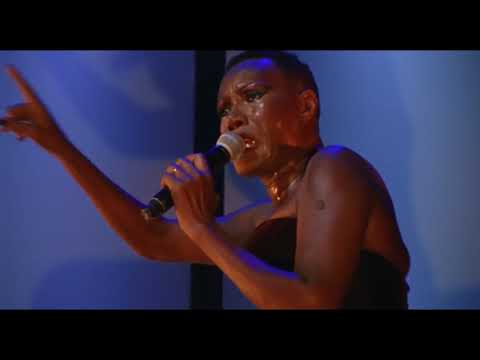