Groovescooter’s STROBE Program returns to the Vivid Festival. First up: The Australian Preview Premiere of the new Phil Lynott documentary, Songs For While I’m Away, which will open in cinemas late 2021.

“You just didn’t see Black people in Ireland in the ‘50s.” As this high quality cinematic feature reveals, that would all change as soon as the charismatic singer/bassist for Thin Lizzy, Phil Lynott burst onto the scene and went on to become one of the rock world’s biggest music stars. Songs For While I’m Away delves into a boy’s unorthodox and painful past, to paint a portrait of a reflective man; poet, dreamer, friend, son, lover, doting father, misfit, but above all a terrific songwriter. With tape recordings of his own voice, the film takes us from humble working class Dublin beginnings to touring the world and his eventual, untimely and sad demise.

The is the first opportunity for people in Australia to see this beautifully executed new film, which includes footage of the Thin Lizzy’s renowned 1978 Australia/NZ tour where they played outside the Sydney Opera House as 100,000 fans gathered and even got to hear them soundcheck earlier in the day with a half-hour impromptu jam. Delving into everything from his motivations and demons, to his eclectic songs and lyrics — including those written for his two daughters — we get a fuller impression of both Phil Lynott as a solo artist keen to collaborate, and the front man for the potent live act that Thin Lizzy became. On hand are friends, bandmates and admirers to recall elements of a somewhat poignant story that includes the search for the father Lynott never really knew. 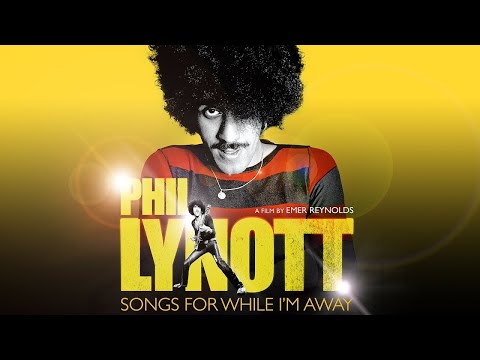 Phil Lynott: Songs for While I'm Away Trailer