★★★★★
“Fifty years on, this crime drama of a headstrong singer shooting for his chance of success is as raw and energetic as its reggae soundtrack” – The Guardian
“With a sensational soundtrack, a terrific central performance from reggae master Jimmy Cliff, and violence as unvarnished as Mean Streets, The Harder They Come has lost none of its excitement. – CineVue
“…An explosive action thriller with a killer soundtrack…” – BFI
“The films that thrust both Jamaican cinema and reggae music into the global spotlight” – Rolling Stone
Celebrating its 50th Anniversary in 2022 and widely credited with “bringing reggae to the world” (before Bob Marley’s own meteoric rise outside his island home), gritty crime-drama The Harder They Come is one of the most influential and important Jamaican films to ever light up cinema screens around the globe. Starring reggae superstar Jimmy Cliff in the lead role of Ivan, the plot centres around a rural Jamaican musician who journeys to the city of Kingston in search of fame and fortune. Pushed to desperate circumstances by a shady record producer and corrupt cops, he finally achieves notoriety as an outlaw which the producer uses to boost the popularity of his recordings but with little financial gain to Ivan himself. Drugs, a dodgy preacher, crime and other pressures all conspire to topple Ivan’s life which is spiralling towards an explosive conclusion. Boasting some of the greatest music ever produced in Jamaica – including Cliff’s theme song and his signature tunes You Can Get It if You Really Want and Many Rivers to Cross, the movie’s soundtrack is as universally revered as the film itself and also includes The Maytals Pressure Drop, later prompting The Clash to write Guns Of Brixton and also cover the Maytals classic itself.
Widely considered a cult-classic and also starring Prince Buster, Janet Bartley, Carl Bradshaw and Alton Ellis, this hard-hitting and unfiltered gem of Jamaican cinema history is enjoying a second revival throughout 2022 as art exhibitions inspired by its indelible images and 50th anniversary screenings continue in cinemas from London, Belfast and Glasgow, Los Angeles to Kingston Town, Melbourne to Sydney. Hugely popular in Jamaica for its authentic, unflinching portrayal of life as well as its all-local cast, The Harder They Come first premiered in 1972 at the Carib Theatre in Kingston and was an immediate local sensation. Director Perry Henzell later recalled how “Black people seeing themselves on the screen for the first time created an unbelievable audience reaction” not least because it also featured actors speaking in Jamaican Patois, prompting the addition of subtitles the following year when the film hit New York and began accumulating up its first international fans via midnight screenings across the USA. 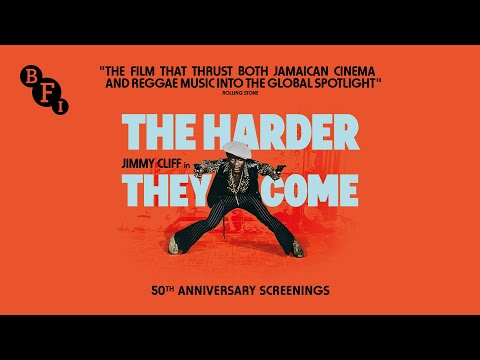